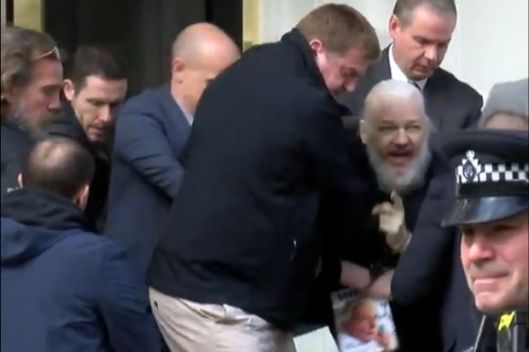 I am breaking the hiatus of this blog to say a few quick words about today’s arrest of Julian Assange by British authorities. After seven long years of asylum, it appears that Ecuador’s (relatively new) government has sold out the famed whistle blower. According to the RT news site, Assange has been arrested for “extradition to the United States” for publishing Wikileaks. Whatever one may think of Assange, this is a sad day. In the end, Assange is being handed over to the US for leaking something that was true.

As RT reports elsewhere, “The whistleblower garnered massive international attention in 2010 when WikiLeaks released classified US military footage, entitled ‘Collateral Murder’, of a US Apache helicopter gunship opening fire on a number of people, killing 12 including two Reuters staff, and injuring two children.” RT continues, “the footage, as well as US war logs from Iraq and Afghanistan and more than 200,000 diplomatic cables, were leaked to the site by US Army soldier Chelsea Manning.” Manning “was tried by a US tribunal and sentenced to 35 years in jail for disclosing the materials.”

The leaked footage was not a work of fiction, nor was it fake news. It is an incident that actually happened; it is the truth. Essentially, Assange has been hunted for years, and is today being arrested in the UK and will be handed over to the US, for leaking the truth. What does it say about the world we live in, and the so-called ‘freedom of the press’ the west pride’s itself on; when those that dare tell the truth or spread the truth or leak the truth are hunted like dogs?

The situation is unfolding. Check back for updates.

1 thought on “Julian Assange Arrested in UK: Plans for Extradition to the US”