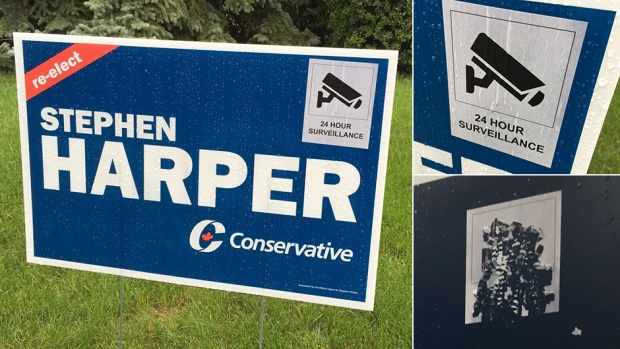 In a not surprising or atypical—yet completely ridiculous—move for Stephen Harper and the Conservatives, Calgary Tory campaigners were recently made to take down ‘24 hour surveillance’ stickers that were purposely posted to Stephen Harper campaign signs (by a member of the local campaign) in Harper’s Calgary riding. Wow, are they serious? How very Stephen Harper and how very Bill C-51 of them! Why not just put up ‘1984’ stickers or stickers with the far-more catchy warning: ‘Big Brother’s Watching You!’ While the national Conservative campaign team claims ignorance of the surveillance stickers (and were the ones who told local campaigners to take them down) and claim that the stickers have only appeared on signs at one particular home, CBC reports that stickers have popped up in other locations. Local campaigners allege that the stickers were put on to deter vandalism to Harper campaign sings, which has been an issue since August. Whatever the reason and regardless of the supposed ignorance of the national Conservative campaign team, nothing could be a more ironic reminder of Harper’s creeping surveillance (errr police) state and more of an in-your-face reason not to vote for Harper and the Conservatives in the upcoming election, than a sticker that warns the public that the Conservatives are indeed watching us!

Whether or not there was any actual surveillance or if the stickers were simply meant to scare off would-be vandals is really beside the point. Their very presence is emblematic of the Harper Conservatives authoritarian surveillance state mentality. On June 9th of this year their controversial anti-terrorism bill, Bill C-51, became law. The Bill (now law) essentially gives Orwellian spying powers to Canada’s intelligence agency CSIS. The Bill is so frightening, and is such an incursion on the privacy (especially the online and digital activity of) and rights of Canadians that it was even contested by many small-c conservatives within the country. These include former media mogul Conrad Black, who argued that some provisions in Bill C-51 create problems for civil liberties. Another critic was former Conservative MP Brent Rathgeber, who complained that Bill C-51 “will allow police to make preventative arrests and hold individuals for seven days without charges”, which is draconian. And the Libertarian Party of Canada said that Bill C-51 is a step backwards and that the Bill gives CSIS “more powers and more jurisdiction over the private information of innocent Canadian citizens, with no increase in civilian oversight.” You know that Harper has gone way too far when his polices alarm even other conservatives.

For many the main problem with the Bill is the fact that there is lots of room for interpretation, meaning that CSIS’ expanded powers of surveillance and other powers could potentially be applied to Canadians that are not actually involved in or planning to commit “terrorist acts.” The Canadian Constitution Foundation, a conservative or right-leaning charity, has concerns about possible vague interpretations of the law. The Foundation warns that, “the way Bill C-51 is worded could allow the government to crack down on legitimate criticism and free speech under the guise of fighting terrorism.” Very similar arguments were made against the Anti-terrorism Act (Bill C-36) when the Liberals introduced it (and other anti-terrorism legislation) in 2001 after 9/11. While the Liberals have been critical of Bill C-51, let us never forget that they were the first ones—under Jean Chretien— to bring us Draconian anti-terrorism laws in the first place. The Conservatives have simply made things far worse and far more draconian; as they are typically know to do! All the more reason for Canadians not to vote Conservative in the upcoming Federal election.