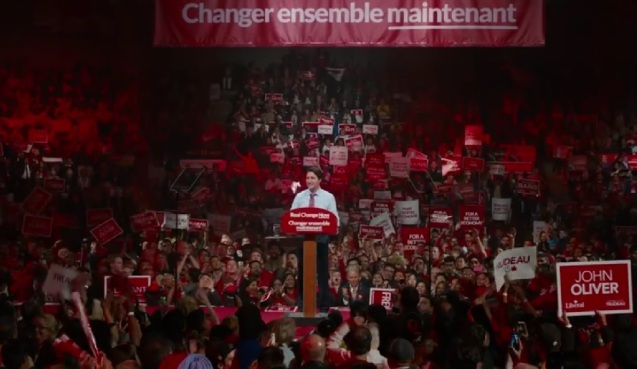 The Election is over and Justin Trudeau, leader of the Liberals and son of the late Pierre Trudeau, has taken the reigns with a majority government. Like many Canadians, I am ecstatic at the exit of Stephen Harper, who during his three mandate-term reign managed to turn Canada into a junior neo-con imperial pariah (not that Canada does not have a long imperial history, but it was greatly amped up under the America-loving Harper). So intense was the hatred of many Canadians for Harper that one has to wonder whether Justin Trudeau’s victory is  a result of his and his team’s clever campaigning or a matter of fortune and good timing; running against a man Canadians had grown to hate and were eager to see gone?!

No matter the reasons for his sweeping victory, there is one thing that struck me as eerily surreal and potentially worrying during Trudeau’s campaigning. Trudeau spoke a lot about, and promised Canadians, hope and real change. “Hope and change,” does this slogan sound familiar? It should. A then would-be presidential hopeful and political new comer, Barak Obama, promised these same things to desperate Americans back in 2008. Americans believed him and looked to him to undo the disastrous foreign and domestic policies of George W. Bush’s neo-con agenda. But while Barack talked a smooth game—much smoother than Justin—in the end, he failed to deliver either change or hope and reneged on almost every campaign promise he had made (i.e., closing Guantanamo Bay, ending the war in Iraq, fixing the economy, creating employment, empowering the poor, etc).

While Justin is not as smooth or charismatic as Obama was back then (though both shared in an appeal to youthful exuberance), he has made similar overtones–one of his campaign slogans was change together now/changer ensemble maintenant–and made certain promises (decriminalizing marijuana, for example, which is not a comprehensive policy but a token gesture) and vowed to return Canada to a purer time (Canada as global “peace keeper,” etc). It remains to be seen what he may or not improve in the next four years. Will he bring real hope and change, or should Canadians brace for an Obama-style disappointment?