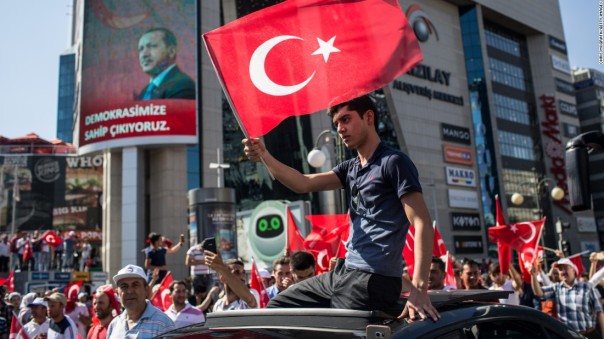 UPDATE: As new reports continue to come out of Turkey–some claiming that the coup continues while others report that Erdogan has successfully repelled the coup and is arresting and or killing those involved–more and more questions are arising.

A question that was recently raised to me is, considering how quickly Erdogan was (allegedly) able to put down the coup, is it possible that he had foreknowledge of the coup plot and allowed it to play out in order to weed out those not fully loyal to him in the military and make strategic arrests ? If this is the case–and I am not claiming that it is, merely speculating about the various possibilities–and if he is able to remain in power, will we see him introduce even more authoritarian and draconian laws (i.e., anti-treason and or anti-terrorism laws, etc) in the near future and what will this mean for the already autocratic political atmosphere in the country?

For now, there are no definite answers, just mounting questions, as the situation continues to unfold and takes some unexpected twists and turns. As someone that very much would like to see Erdogan and Islamist leadership out of Turkey I wonder and worry about the fate of the country. If Erdogan is able to regain full control of the state, then the country must brace for what is to come.